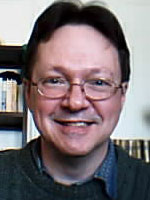 Nineteenth & Twentieth Century French Literature and Culture - Works of Gilles Deleuze & Felix Guattari - Translation of Seminars of Gilles Deleuze (Leibniz 1980; Leibniz 1986-87), in the context of an NEH Grant for development of The Deleuze Seminars website, Purdeu University Dept of Philosophy.

Born in Bloomfield, NJ, in 1949, Charles J. Stivale completed his college education at Knox College (BA), then spent two years in Paris at the Université de Paris (Sorbonne-Paris IV) where he earned two M.A. degrees (including a maîtrise). He completed doctoral work in French studies at the University of Illinois-Urbana/Champaign. Besides having directed two year-long foreign study programs in France (Besançon, 1976-77; Rennes, 1981-82), he has held positions at Western Michigan University, Franklin and Marshall College, and Tulane University. He came to Wayne State University in 1990, has served as chair of the Dept. of Romance Languages and Literatures (1996-2002) and as interim chair of the Dept. of Art and Art History (2003-2004). He was elected to the Academy of Scholars in 2000 and served as President in 2003-2004.

Stivale has authored six books in nineteenth and twentieth-century French and Francophone studies, has edited or co-edited three volumes of studies and six journal issues, has prepared translations of two major works, a half-dozen article, and the eight hour video interview with Gilles Deleuze, published (by MIT Press/Zone) as Gilles Deleuze, From A to Z (2012). He has also published eighty journal articles and chapters in edited volumes. His research fields have included study of the nineteenth-century French novel, twentieth-century critical theory and cultural studies, the writings of French philosophers Gilles Deleuze and Félix Guattari, and research on Louisiana Cajun music and dance culture. Between 2005 and 2011, he collaborated with the former director of the University of Florida Paris Research Center, Gayle Zachmann, to organize an annual meeting of scholars in nineteenth-century French studies.